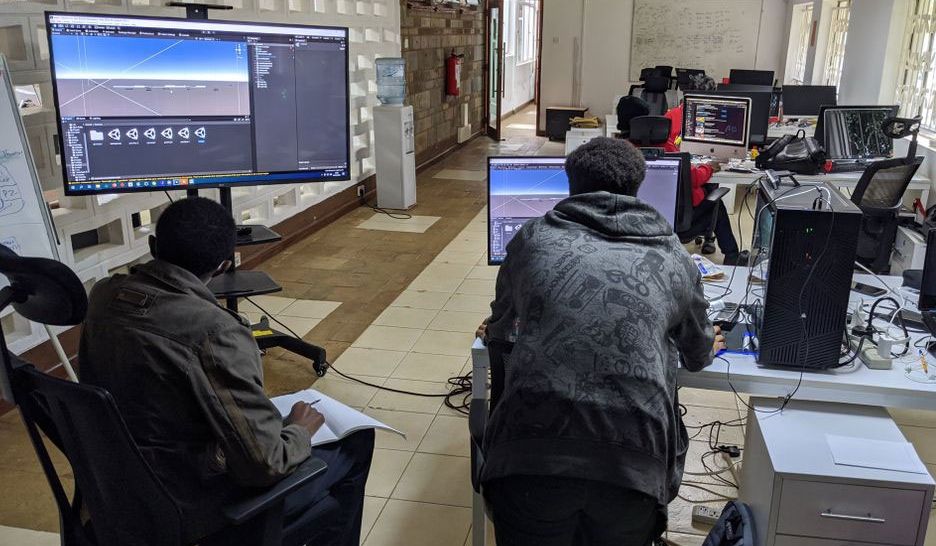 Dominated by the West, the video game industry is now making inroads in many studios in African metropolises. Where the continent's rich cultural-historical heritage is promoted.

The video game sector, which has been the world's leading cultural industry for several years, is presented as one of the few winning sectors in a year marked by the pandemic. Containment measures and the closure of social venues have boosted game consumption. However, Covid-19 has also brought its share of negative effects: cancellation of major gaming festivals and e-sport events, delays in game development...

"The containment led to an increase in sales of our PC game Aurion. But we had to postpone the release of other projects planned for 2020," explains Joseph Nama, marketing manager for the Yaoundé, Cameroon-based company Kiro'o Games. It is one of the many independent studios that have launched themselves over the past decade in the main African metropolises. South Africa as well as North African countries are leading the way in this sector, but the geography of the studios is changing.

"We have several studios in South Africa that employ full-time professionals and have been able to create a sustainable business model for the video game industry. However, the size of the sector is still very small. According to a recent census, there are only 300-400 video game developers in the country. So there is a lot of room for growth," says Limpho Moeti. The producer and head of business development for the Cape Town-based Nyamakop studio is excited about the emergence of robust technology ecosystems that can support the creation of studios in other countries, such as Kenya and Ghana.

Globally, the African continent accounts for only a small percentage of the total revenue generated by the video game industry. But it has seen a rapid increase in consumption in recent years, driven by its dynamic demographics, growing internet coverage and the widespread use of smartphones. "With Covid-19, revenues have increased but mainly on sales of foreign games," says Eyram Tawia, a Ghanaian entrepreneur and co-founder of the Leti Arts studio (founded in 2009). Indeed, the best-known franchises (Call of Duty, League of Legends, FIFA, Counter Strike, etc.) are preferred by local gamers. But Eyram Tawia is optimistic about the future of African creations: "Consumers are increasingly looking for homegrown games and many young people have taken advantage of the confines to train online in video game development.

Africa remains marginalised in the video game industry, says Max Musau. "Yet there are so many African stories to explore... We want to fill that gap!" The Kenyan entrepreneur and gamer founded Jiwe Studio last year with the support of the technology company Africa's Talking. The Nairobi-based studio has just released its first game, Usoni, a post-apocalyptic platformer in which the heroes must leave the hell of Europe to reach the African Eldorado by overcoming numerous obstacles (see interview on next page). The second game will focus on the biography of the activist Wangari Maathai, winner of the Nobel Peace Prize in 2004.

Many of the games are based on Afrocentric narratives that emphasise pan-Africanism. We want to preserve our culture and instill pride in our heritage in the youth," says Eyram Tawia. African history, culture and mythology are rich, yet the younger generation has more affinity for Western culture, largely because of imported electronic content that is attractive."

The games developed by Jiwe Studio, Leti Arts and others are inspired by folklore and myths, but also by great historical figures and the realities of everyday life. These productions are primarily aimed at a local audience, offering a more complex, authentic and empowering image of the continent than that portrayed in Western games. "The main characters in video games are often white and male. This is a direct consequence of a professional environment dominated by white men. Furthermore, most black characters have secondary roles or reproduce racist stereotypes," complains Nathan Damtew, who recently told gamesindustryafrica.com how, as a teenager, he stopped being attracted to video games because he could not identify with the characters and stories.

This Ethiopian entrepreneur has developed an application called Be Blocky that teaches children to code in a fun way using avatars that look like them. He advocates a diversification of recruitment in large video game companies, as well as a strengthening of initiatives by African independent studios to fill the gap of black heroes and heroines, and of stories rooted in the realities of African societies. "One of my favourite games is Kukulu (Qene- tech, 2018), the player plays a chicken running through different villages, chased by its owner," continues Nathan Damtew. This is a common scene in Ethiopia, I too have had to chase a hen a few times and always wanted to experience how it felt."

In the wake of the Marvel film Black Panther (2018), several creations feature black superheroes and superheroines. Gamers can look forward to the release in the coming months of the role-playing game Africa's Legends Reawakening (Leti Arts, a sequel to the 2014 game Africa's Legends) and also African Heroes, a Guinean adventure and combat game that will allow players to embody the great figures of decolonisation.

This proliferation of new studios and games is also marked by a difficult economic context. In many countries, technology companies are struggling to sustain their business. It is not uncommon to see studios close down after a few months or years of existence. The challenges are quite numerous," admits Joseph Nama of Kiro'o Games. We are struggling to find qualified profiles because of the limitations of the training offer in Africa. We have difficulties in raising funds because investors still do not believe in the potential of African youth, and we also accumulate delays in the delivery of some projects because of regular power cuts and low internet speed in Cameroon."

Among the main obstacles faced by independent studios is the distribution and monetisation of games. "Usoni is priced at three dollars, which is affordable, it's the price of a meal," notes Max Musau, "but the challenge is accessibility to the game. Here, PayPal and credit card transactions are not very common, the popular payment method is money transfer by mobile phone. That's why we are working hard on our game sales platform Jiwe.io, which brings together several Kenyan studios and which we would like to expand to other African countries."

Faced with the constraints linked to consumption patterns and the limits of telecommunications infrastructures, some studios are betting on innovation. This is the case of Leti Arts, which intends to make Africa's Legends Reawakening the "first game of its kind in Africa", a game that will be available in a wide variety of formats. "Africa's Legends will adapt to the capabilities of each tool. A text-based version will be accessible via SMS on mobile phones," says Eyram Tawia. Other versions will combine text and images for online messengers such as Messenger. And on a computer, the game will have accomplished graphics and gameplay.

Developed by Nairobi's Jiwe studio and available on Android and PC (www.jiwestudio.itch.io) for $3, Usoni is Africa's first post-apocalyptic video game.

Based on the scenario of a TV series that remained in the pilot stage, the game plunges us into 2063, nearly twenty years after the great climate catastrophe of 2035. Volcanic eruptions, nuclear accidents, tsunamis, earthquakes... Europe has not recovered, it is plunged into darkness, covered by a thick coat of darkness. The two protagonists are Ophelia and Ulysses, a mixed couple who try to reach Africa through Lampedusa. Only part one of the game is currently available, with parts two and three planned for late 2021 and 2022.

Telvin Njoroge, 25 years old, is one of the two active developers on Usoni. He talks about his career path and this first professional experience.

How did you become a developer?

Telvin Njoroge: I started in 2018 after playing God of War. That game grabbed me and I wanted to create similar experiences for other people. I started learning video game development on my own on YouTube because there was no school at the time. A game design course just opened in Nairobi, which is a start, but all the developers I know here are self-taught.

What was the biggest technical challenge in making Usoni?

The biggest challenge was definitely the optimization for the mobile version. We first created Usoni for PC use and then it was very complicated to adapt it to Android. But we had to do it because the majority of Kenyans play on their smartphones.

Why did you choose to create a platform game?

We wanted to make a 3D game at first but we were limited by time. That's why we chose to develop a 2D platform game in a 3D setting, which is called 2.5D. Unlike the second developer, I am not a fan of platform games, but he shared his favorite games like Inside (Playdead) and Ori (Moon Studios)which  influenced us. On the other hand, parts two and three of Usoni will be developed in 3D.